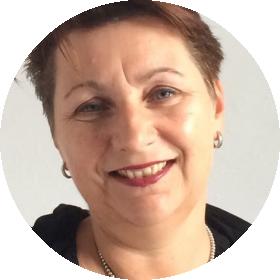 I work as the secretary of the Focal Countries Desk since 2021.

I studied Political Sciences, with a specialisation in International Relations, at the University of Amsterdam. After graduation, I worked as a desk officer for several international development organisations in the Netherlands, where I was responsible for the management of social-economic and environmental projects in South America and emergency aid for the Balkans.

In 2003 I moved to Italy for family reasons and worked as a secretary for the Royal Netherlands Institute in Rome (KNIR) and the board of the cultural association Stichting De Lage Landen. The latter managed the Dutch school ´t Kofschip, where my son took Dutch classes every week.

Oddly enough, it was while living in Italy that I became more interested in Dutch history and culture. I also realised how many important international cultural organisations are based in the Netherlands, like the World Press Photo Exhibition and the International Documentary Festival Amsterdam (IDFA).

Now that I'm back home in Amsterdam, I really enjoy working for DutchCulture and being part of an organisation that promotes culture worldwide.

Art is a lie that reveals the truth
Pablo Picasso