Children from around the world enjoy Dutch arts and culture: a sunday afternoon with 'Glimpse'

Children from around the world enjoy Dutch arts and culture: a sunday afternoon with 'Glimpse'

Magazine tags
Culture for Kids
Experiencing DutchCulture with a foreign audience: the Never Grow Up! programme in the United States. Renske Ebbers visited 'Glimpse' by Oorkaan in New York.

In May, I was on a working visit to the Consulate General of the Netherlands in New York. Sunday, May 12th I arrived at JFK airport and immediately made my way to the Brooklyn Academy of Music. Even though the city was caught in heavy rains, a large crowd of parents and children assembled at the BAM Fisher stage to experience Dutch performing arts: the staged concert Glimpse by Oorkaan.

For me, working in Amsterdam for DutchCulture as an advisor on Dutch international cultural policy in the United States, what was about to happen was an amazing and rare opportunity. At DutchCulture we advise on, promote and collect activities from Dutch cultural organisations in all disciplines. More than 15 thousand exhibitions, talks, performances or collaborative projects from Dutch hands travel the world each year. Needless to say that we usually follow these activities from afar in our Amsterdam office, but here I was on a Sunday afternoon in Brooklyn, ready to experience one of the thousands of Dutch activities in my excel sheets, in real life. 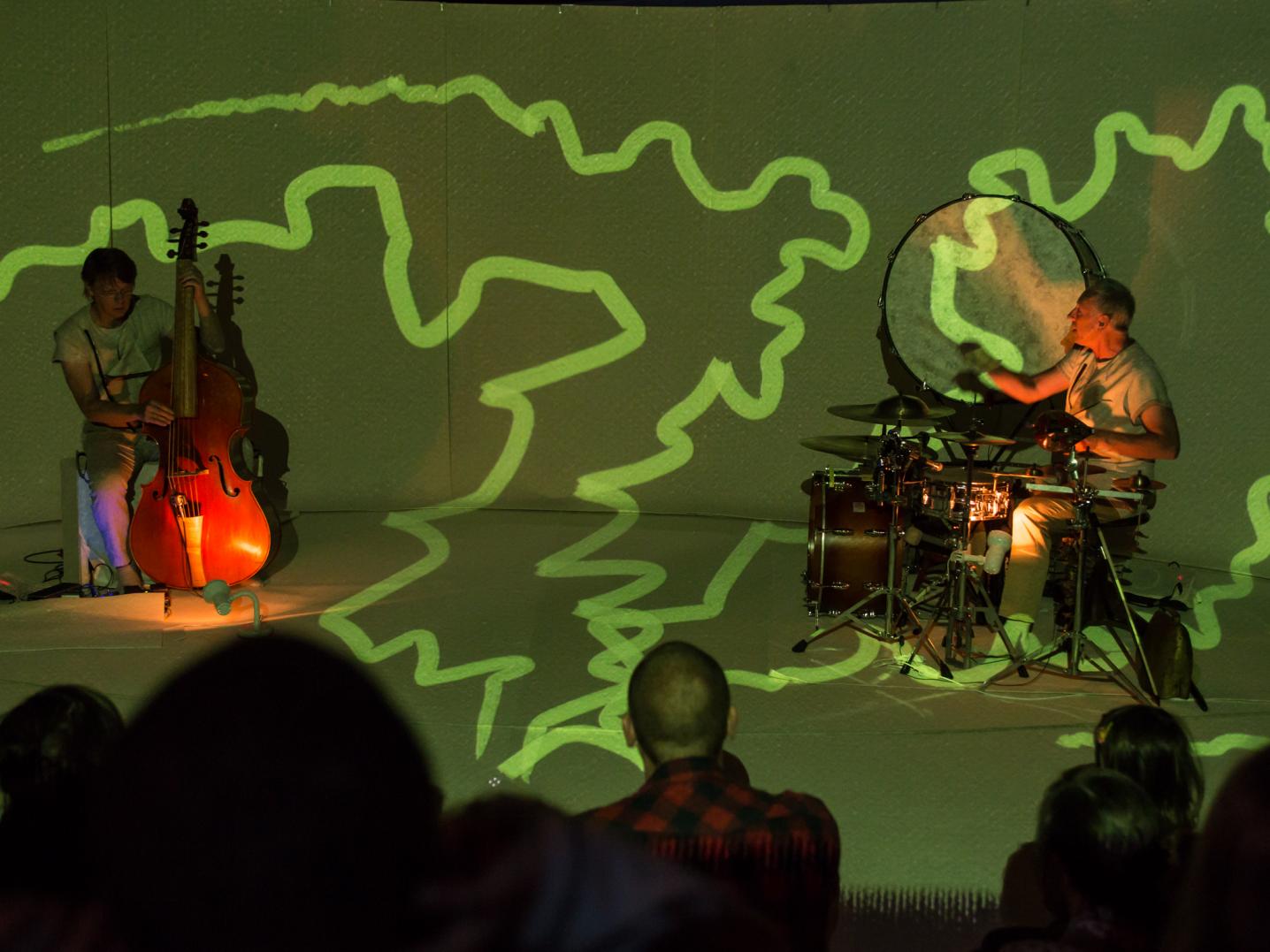 Caption
Glimpse, Oorkaan. Photo: Ronald Knapp
Authors
Ronald Knapp
Children are very excited by complexity, because there is much more to discover for them compared to the simple and boring
Oorkaan in the international spotlight

In today’s spotlight is the cultural organisation Oorkaan. Oorkaan creates high quality and enticing staged concerts for young audiences and is no stranger to the world stage. Founded in 2000 they have dedicated themselves to bringing classical music in a way that children will listen, really listen, by using theatrical elements. They connect theatre directors and musicians to experiment and create together, always keeping the music central to their work. This ‘Oorkaan method’ that has been developed over the years, has enabled them to do something unique in the theatre and music field as well as the arts and culture field for children of the Netherlands. It makes them a welcome guest at international stages. In an interview with Moon Saris for the Performing Arts journal de Theatermaker, Oorkaan’s director Caecilia Thunnissen and Head Internationalisation Erin Coppens explain: "Parents and teachers decide that children will not like it [classical music, ed.] That is total rubbish. Children are very excited by complexity because there is much more to discover for them, compared to the simple and boring. They do need something, to really be drawn into the music, and it is our job to find those doors and windows to give them access, to enable them to really listen to the music."

Some parents are explaining modern art theories and the essence of jazz to their four-year-olds, some are dancing and acting like four-year-olds
Opening doors and windows for the tiny children

Back to Brooklyn, Sunday afternoon. I am standing among the American audience, with its different cultural backgrounds, that is about to experience the Dutch performance Glimpse by Oorkaan. We are asked to put off our shoes and sit in the white landscape before the cushions. Behind the cushions, the percussionist Rob Kloet and violone player Tony Overwater await the children. Live-illustrator Bram de Goeij, who invited us into the room by connecting his melodica to the little lightbulb above his head - the more sound the brighter the lightbulb - takes his place behind his table from which he will visually accompany the musicians with live drawings during the concert. In doing so, he is opening doors and windows for the tiny children, mesmerized from start to finish by the drumbeats and low tones of the violone evolving into projected lights, chasing each other, competing with each other, and eventually shining brightly together as the instruments interweave in triumphant tunes, performing a concert whose complexity is greatly enjoyed by the young audience.

Children are intuitively impressed with live performance; they whisper, they think everything is "Magic!" and they don´t differentiate between the world on stage and their own reality. In this Oorkaan performance, however, they are not completely sucked into the performance; it is not a story but an abstract variation of scenes, sounds and animations. This gives the children the opportunity to sometimes check out and reflect, what does this sudden change mean; why is the bass purple, where did the big bright sun of the drums go? It is great to see the children under a spell in one moment, dancing and enjoying the concert in the next, and suddenly critically evaluating and reflecting upon these nonlinear events. The tiny children are not entertained, drawn into a princess story, nor educated about instruments, they are stimulated to think and feel for themselves.

The lack of a story in this performance and its minimal animations enable the listener to concentrate on the joint playfulness of the violone and the drum. The music is worth listening to and the little children are worth being taken seriously once they are given an entry into the music they dive into, questioning and enjoying their experiences along the way. 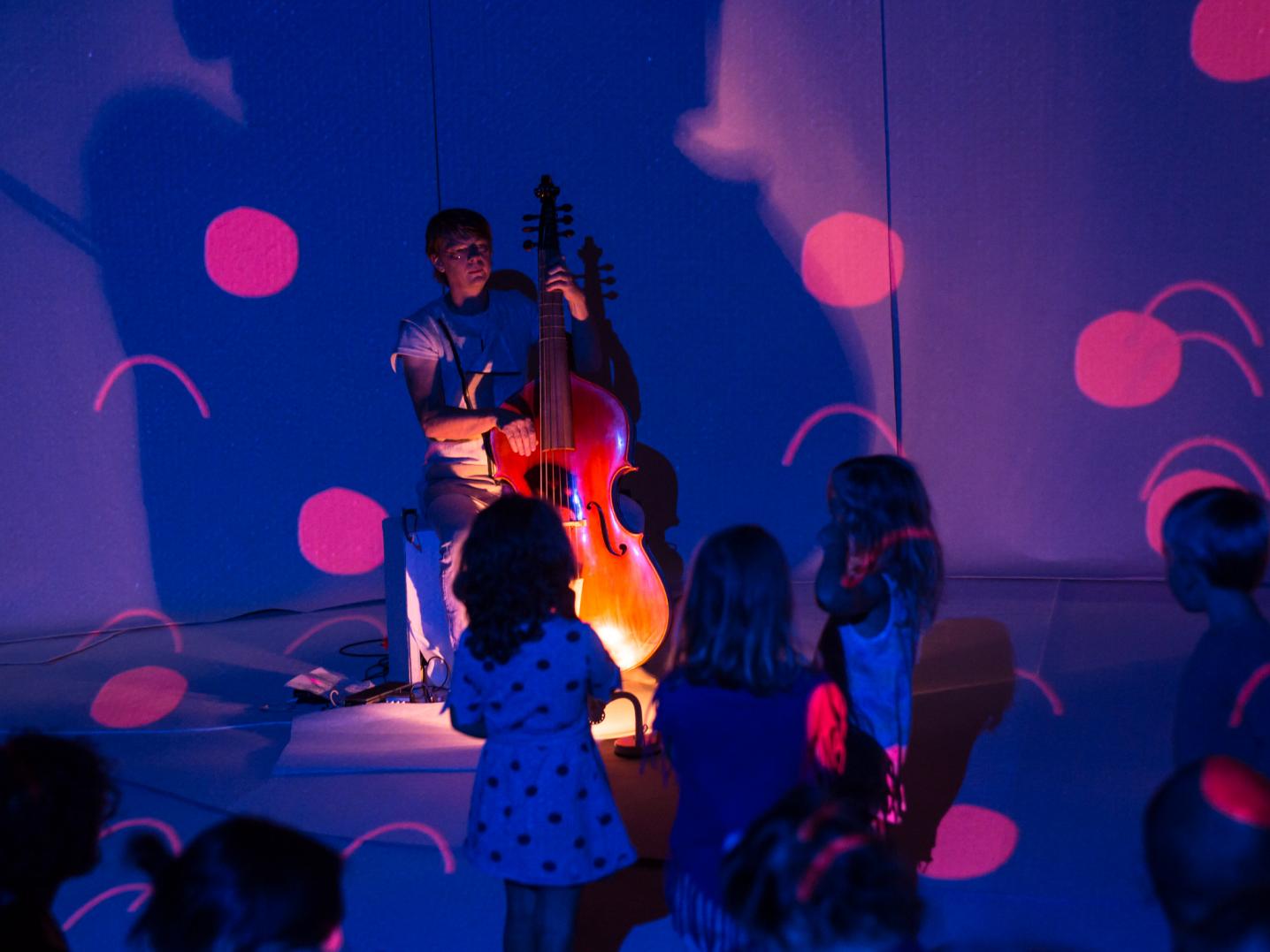 The children, even if they are coming from different backgrounds, show very similar behaviours and reactions, whilst the parents’ reactions vary greatly. Some are explaining modern art theories and the essence of jazz to their four-year-olds, some are dancing and acting like four-year-olds. A sharp-suited father tries to read the program to his daughter and other parents are caught in the spell of the performance themselves, forgetting about their toddlers on the edge of the cushion wall. After the performance, I talked to live-animator and director Bram de Goeij about performing as a Dutch organisation abroad, and I asked whether the reactions were different in China, Italy or Germany? De Goeij: "The children always react the same way, engaging and enjoying the performances. The parents accompanying them, however, can be very different on one side of the world or the other." From disciplining their children to remaining seated and silent, to encouraging them to touch the instruments and run around, Bram has experienced the cultural differences. Maybe Dutch Youth Arts abroad is not just about children after all.

As I stepped out of the theatre, the rain was still pouring down, yet I felt very happy with my experience. I know that many more Dutch music, theatre, dance, film, interactive media and literature expressions will be shared with young and eager audiences in the United States in this focus year 2019 during Never Grow Up!, and much more in the years to come. At the Kennedy Centre in Washington, at the Brooklyn Book Festival, and during the national tour of the New York International Children’s Film Festival, foreign audiences will be able to experience Dutch Youth Arts. A universal experience apparently, unique nevertheless, and I hope everyone will enjoy it as much as I did. 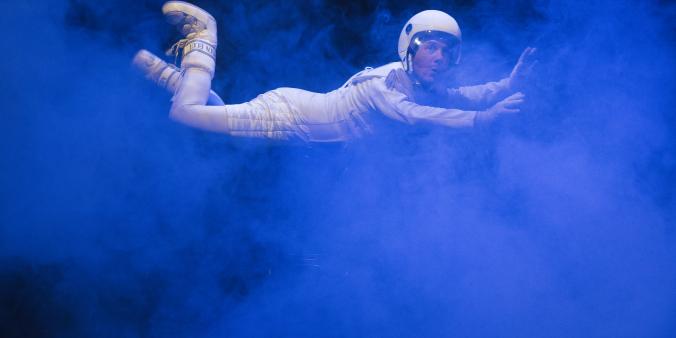 Throughout 2019, Never Grow Up! presents an abundance of Dutch film, literature and performing arts for young audiences in the United States.