In south-western India, the legend of a sunken city and the physical remnants of a proto-globalised world spark the imagination. What is the Dutch connection?

Millennia of cultural exchange, colonial history, and a mysterious sunken city provide fertile basis for India’s largest ever heritage conservation plan: the Muziris Heritage Project. What does it entail and what is the Dutch connection to it, both in the past and in the future?

It is hard to exaggerate the scope of the Muziris Heritage Project, set up in the southern Indian state of Kerala. It is named after the old port Muziris - once referenced by Roman historian Pliny the Elder as “the emporium of India”- that presumably vanished from the map due to major floods in 1341.

In recent years, the Kerala Government has been setting up an ambitious and holistic approach to research and retrieve traces of this lost port, but also to present the coastal region’s rich cultural history. Ultimately, the Muziris Heritage Project will be India’s biggest ever heritage conservation project, comprising close to thirty separate sites and museums and spanning a timeline of three thousand years of commercial activity resulting in the presentation of traces left by Roman, Chera, Jewish, Chinese, Arab, Persian, Vijayanagar, Portuguese, Dutch and British passers-by.

Demonstrating the diversity of this heritage and the global connectivity of Kerala as a region is among the main goals of this project. Benny Kuriakose, a key figure in the development of this endeavour in his capacity as conservation architect and designer, visited the Netherlands last December upon invitation by the Dutch Embassy in New Delhi. As part of a larger delegation, the aim of his visit was to find expertise to help realize the project, but also to delve deeper into the shared history of Kerala and the Netherlands. 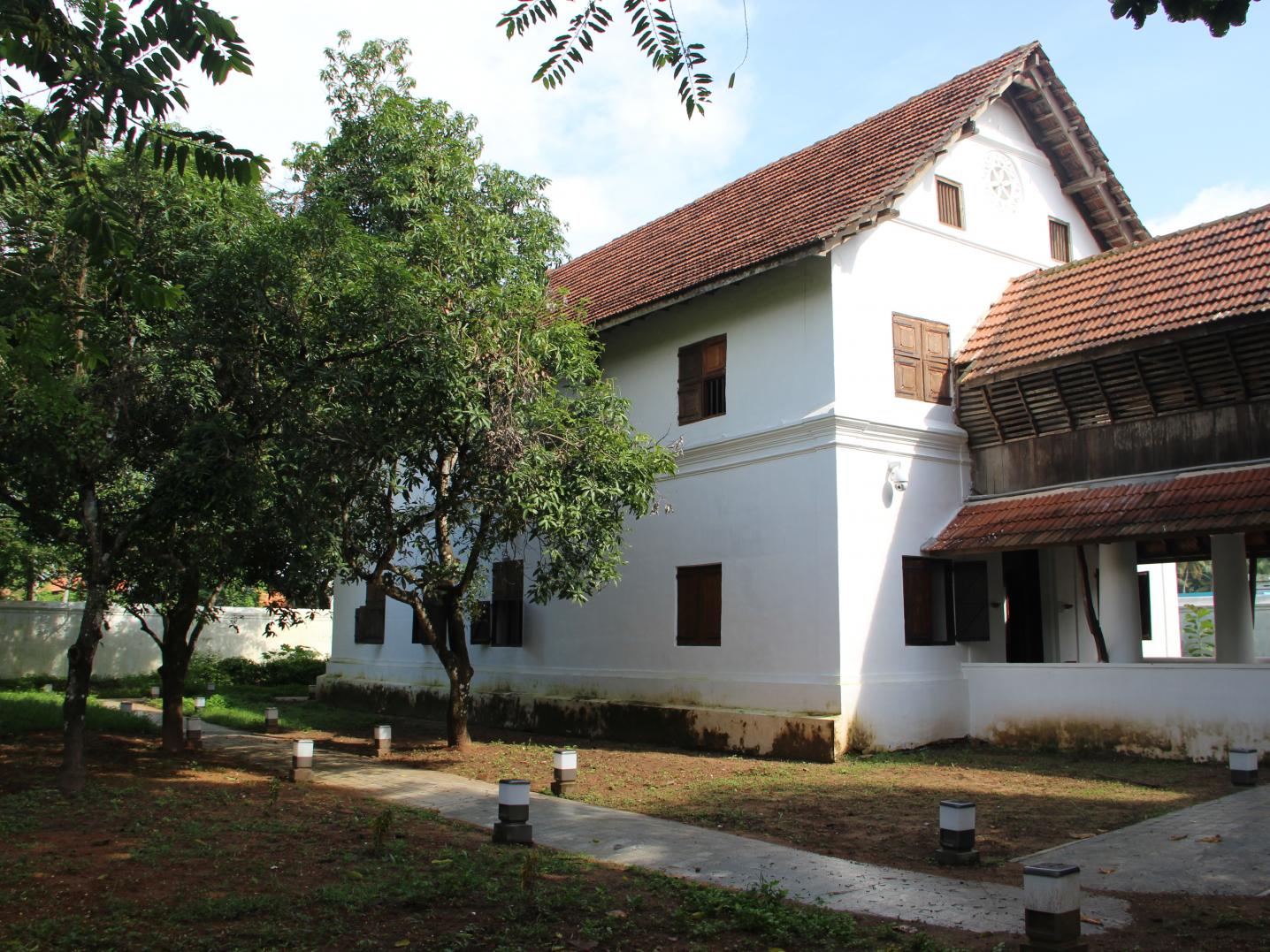 Caption
The Paravur Synagogue is built with a unique blend of traditional Synagogue architecture as well as Kerala architectural styles. Jewish people (Malabar Jews) had been arriving in Kerala since 1st millennia BC for trading, and their communities were mostly settled around today's Kodungallur region (which was then a Roman trading port named Muziris) and Kollam. They received royal patronage and special rights from the local Chera kings such as Cheraman Perumal and established Synagogues at their respective settlements for public worship.
Dutch connection

Overtaking the Portuguese as the monopolists of the Indian Ocean during the 17th century, the Dutch saw great strategic value in gaining a foothold in the port of Cochin. In their characteristically exploitative way, the Dutch East India Company interfered in the affairs of local Indian kingdoms to obtain trading rights for valued spices. Together with Batavia and Ceylon, Cochin formed a trade triangle essential to the Dutch-controlled spice trade. Mostly tea and black pepper were strongly demanded resources from along India’s south-western coast.

Perhaps we cannot speak of a Dutch era in the same way that we speak of the Portuguese and British eras of colonial rule in Kerala; the Dutch did not show their interest in disseminating the perceived benefits of Western civilisation upon the people of Kerala. They did not build many churches or schools. In the larger scheme of things, the Dutch may have been just a small speck in the long history of Kerala, but a more quotidian legacy can still be perceived.

Yet there was "tremendous" influence from the Dutch, in the words of Kuriakose. One of the sites of the Muziris Heritage Project showing the architectural footprints left by the Dutch is already open. The Paliam Palace, not far from Cochin, was the official residence of the Prime Minister serving the Rajas of Cochin. Helping the Raja build this official residence, the Dutch incorporated elements of their own architecture with sash windows and its steep roofs. “This style and influence were incorporated and repeated in the building of residential houses even after the Dutch period,” says Kuriakose, “and in the museum inside Paliam we also aim to reflect on how the Dutch have influenced Kerala beyond these material elements.”

One of these immaterial elements is a linguistic effect of less glamorous nature. Kerala’s first language, Malayalam, contains the word ‘kakkūs’, taken from Dutch ‘kakhuis’ and is still commonly used for toilet. Considering that ‘toilet’ also is a French loan word used both in Dutch and English, it raises the question whether the object’s banal application will always require a foreign word that can make it sound just slightly classier.  Another contribution made by the Dutch was the compilation of the Hortus Indicus Malabaricus, an extensive 12-volume compendium on the medicinal use of the many herbs and plants that the Dutch encountered in Kerala.

Eventually, the Dutch presence in southern India evaporated quickly after suffering a devastating loss in the war against the kingdom of Travancore after the battle of Colachel in 1742. In this fight, the VOC-admiral Eustache de Lannoy was captured by the Maharaja of Travancore. He spent the rest of his life serving as a bodyguard and later as his chief admiral. He became most known for his efforts in modeling and organising the naval forces after Dutch example. He also oversaw the construction of many fortifications along the southern coast and helped Travancore to gradually expand its territory. Ever since this defeat, the Dutch East India Company’s influence remained limited to a number of small trading posts until the British ultimately took over the hegemony on the entire subcontinent.

A reflection on the global connectivity of the region’s past also sparks the need for an evaluation of the pressures of modern-day tourism and consumerism on the local environment. How does this fit in with such a large project? Kuriakose: “What we try to do is making the best use of bottom-up practices. We want the local community to use heritage as a tool for development. Conservation of shared heritage in the hands of the local citizens is one of the top priorities because it contributes to non-formal educational programmes about the community’s history and about the global significance of this region.”

In this sense, the project depends upon but does not want to cater specifically to touristic demands, despite the short-term incentives that may arise. “Of course we do not deny that tourism can be beneficial,” continues Kuriakose. “It is required, but we want it to be controlled by the local community. We develop projects in which communities are the owners. The project as a whole was different from anything we had done before; there are countless private-public partnerships. The government is looking at it in broader terms, in which the conservation and presentation of heritage are central. In the earlier projects, attempts were made to acquire large plots of land to attract touristic investors and operators, now we do no such things as they prove to be harmful to the sustainability of the local environment.”

Equally harmful was the effect of the heavy floods that struck Kerala in August 2018. In the way that it impeded the development of a number of heritage sites, it echoed the disappearance of the once legendary port Muziris. “The impact of the floods was very high, as a lot of areas were affected by the floods,” says Kuriakose. The project was slowed down considerably, but in totality the damage was limited. Once Kerala recovered, the project regained its momentum again too. The visitor numbers have picked up again and are now back to pre-flood levels. “All the projects do reasonably well. Nine museums are now open to the public, of which three had to be closed due to the floods. And many other sites will open in the coming years.”

Ensuring resilience can be called a forte of Kuriakose. He was involved in the rehabilitation of many houses and structures affected by the 2004 tsunami in Tamil Nadu. As he said in an earlier interview: "One major factor for the success of any of the rehabilitation projects is the involvement of the beneficiaries in the planning and construction process." Here, too, the involvement of local stakeholders forms an important part of his particular vision of sustainable architecture.

Some three months after the floods, the Kerala delegation - including Kuriakose - came to the Netherlands in an action-packed visitors programme set up by DutchCulture and the Cultural Heritage Agency of the Netherlands.“We realised what we were lacking; technical guidance and assistance. The Dutch museums we visited are very advanced when it comes to the presentation of objects and the use of digital technologies,” says Kuriakose. In addition, primary sources from the National Archives in The Hague can shed new light on the region’s history. “Those records are unique sources of information, and as such, they need to be studied. We need to train our own museum researchers in deciphering and interpreting old Dutch texts and cartography. That’s why we hope to set up capacity-building programs with the help of the Cultural Heritage Agency, the National Archives and the University of Leiden.”

Another intended effect of the visitors programme is to establish collaborations with some of the museums with the goal of creating new exhibitions on Dutch heritage in India. Kuriakose is hopeful: “This what we are discussing in the next few months, and there is a constant and constructive dialogue between the Government of Kerala and the Dutch embassy in New Delhi. This visit has been very fruitful.”

Cultural Heritage Agency of the Netherlands