Magazine tags
COVID-19
Internationalisation
Country
Indonesia
The 50-years story of the Erasmus Huis, the cultural centre of the Netherlands in Jakarta, reflects a dynamic relationship between two countries.

On 7 July 1968 the Ministers of Foreign Affairs of the Netherlands and Indonesia signed an agreement on cultural cooperation, which featured hopeful expressions as the “strengthening the existing bonds of friendship between the peoples of their countries” and “mutual understanding and knowledge on the widest possible scale, of their respective scientific, artistic and other cultural heritages”.

New journey together
With these words, both countries started a new journey together. Behind them lay a contested colonial past going back to the early seventeenth century, the joint endurance of the Japanese rule during the Second World War, a bloody war of independence and diplomatic fall-out during the reign of Indonesia’s first president, Sukarno. Under his successor Suharto, the borders of Indonesia were reopened for business. International relations were reestablished, including with former colonizer the Netherlands.

The agreement on cultural co-operation encouraged for the organisation of “artistic manifestations such as exhibitions, concerts and lectures”, as well as the promotion of exchanges “in the fields of scientific and other cultural literature, films and sport; and cooperation in film-production, radio and television programmes”.

To get started with this, the Netherlands established a cultural centre in a former colonial residential house on the Jalan Menteng Raya 25, just southeast of Merdeka Square in the heart of Jakarta. The Netherlands Embassy itself had recently moved to a building located virtually around the corner, on the Jalan Kebun Raya 18. On 10 March 1970 the new cultural centre, which was named Erasmus Huis, was opened by Prince Bernhard of the Netherlands who was visiting Indonesia at the time. 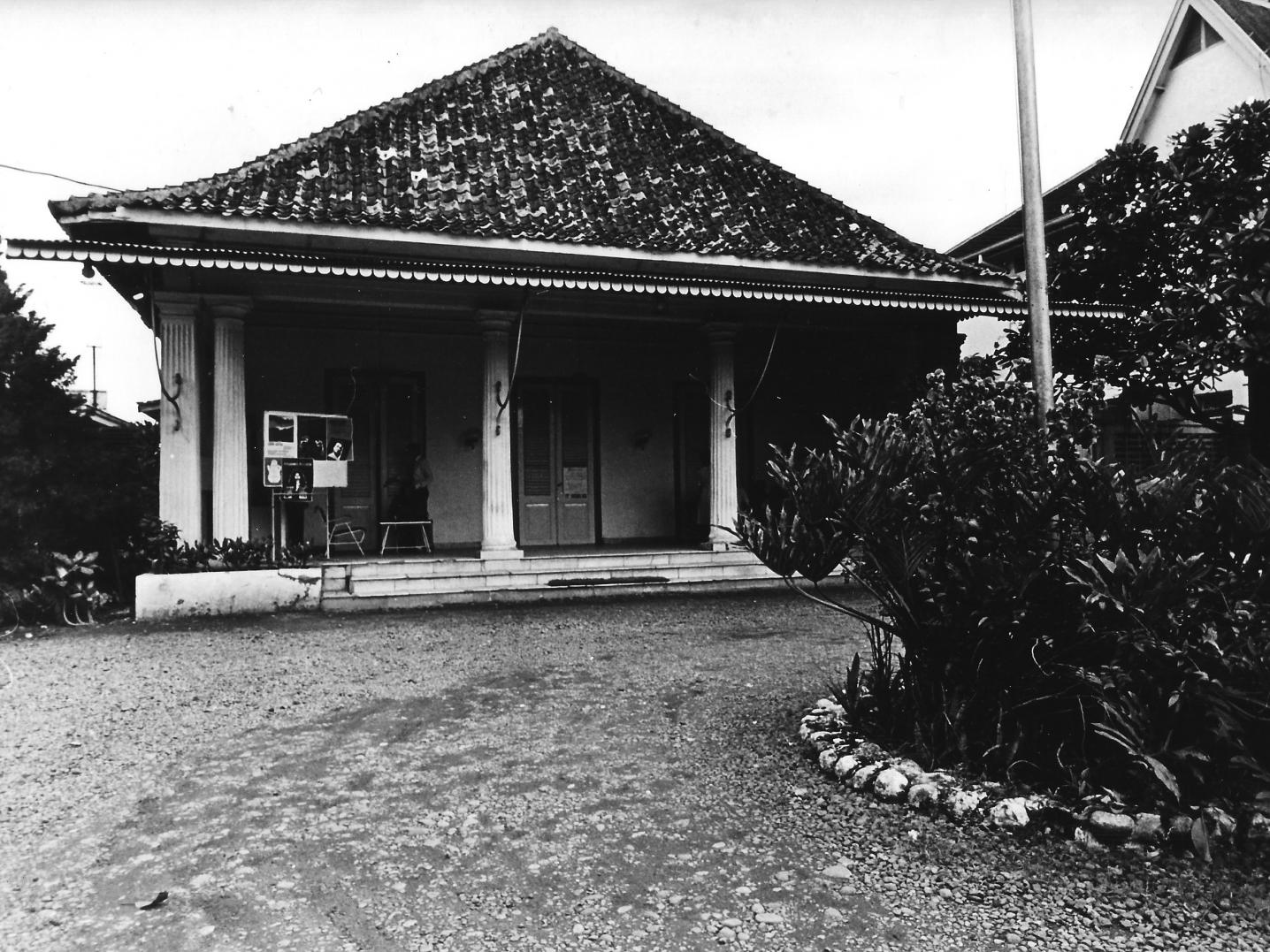 A relatively modest house, set in a garden a bit away from the main street, with a colonnade in the front and on the side. People lounging in the shade on rattan furniture, reading and smoking. A reading room that opens up to the garden, with big tables with Dutch newspapers and magazines spread out everywhere. In another gallery, a temporary exhibition has been set up. Even though the available photos of the Erasmus Huis are in black and white, they give the impression of homely atmosphere. The regional Dutch papers Leeuwarder Courant and Tubantia described the Erasmus Huis as follows: “Apart from the existing reading room and library, the centre will be expanded with a language laboratory donated by Philips. The Erasmus Huis currently also allows for the organising of exhibitions, as well as lectures and movie screenings. It already facilitates Dutch languages courses on five evenings per week”.

Initially, the Erasmus Huis had a strong focus on stimulating, and preferably expanding, the use of the Dutch language within Indonesia. A lot of professional literature available at universities was in Dutch. In several Indonesian cities such as Bandung, Yogyakarta and Makassar reading rooms and libraries with Dutch books were opened. A 1971 research showed that “77% of students at seven Indonesian universities thought that passive knowledge of the Dutch language was necessary for successful studying. Although the number students that actually speak Dutch at home is very small (3%), 12% of the parents of the interviewed students still use Dutch as speaking the language at home”. The Dutch regional paper Limburgs Dagblad then continues to conclude that “these figures clearly show that higher education [in Indonesia] is unthinkable without the Dutch language being involved in one way or another”. A conclusion which turned out to be outdated within the next years. 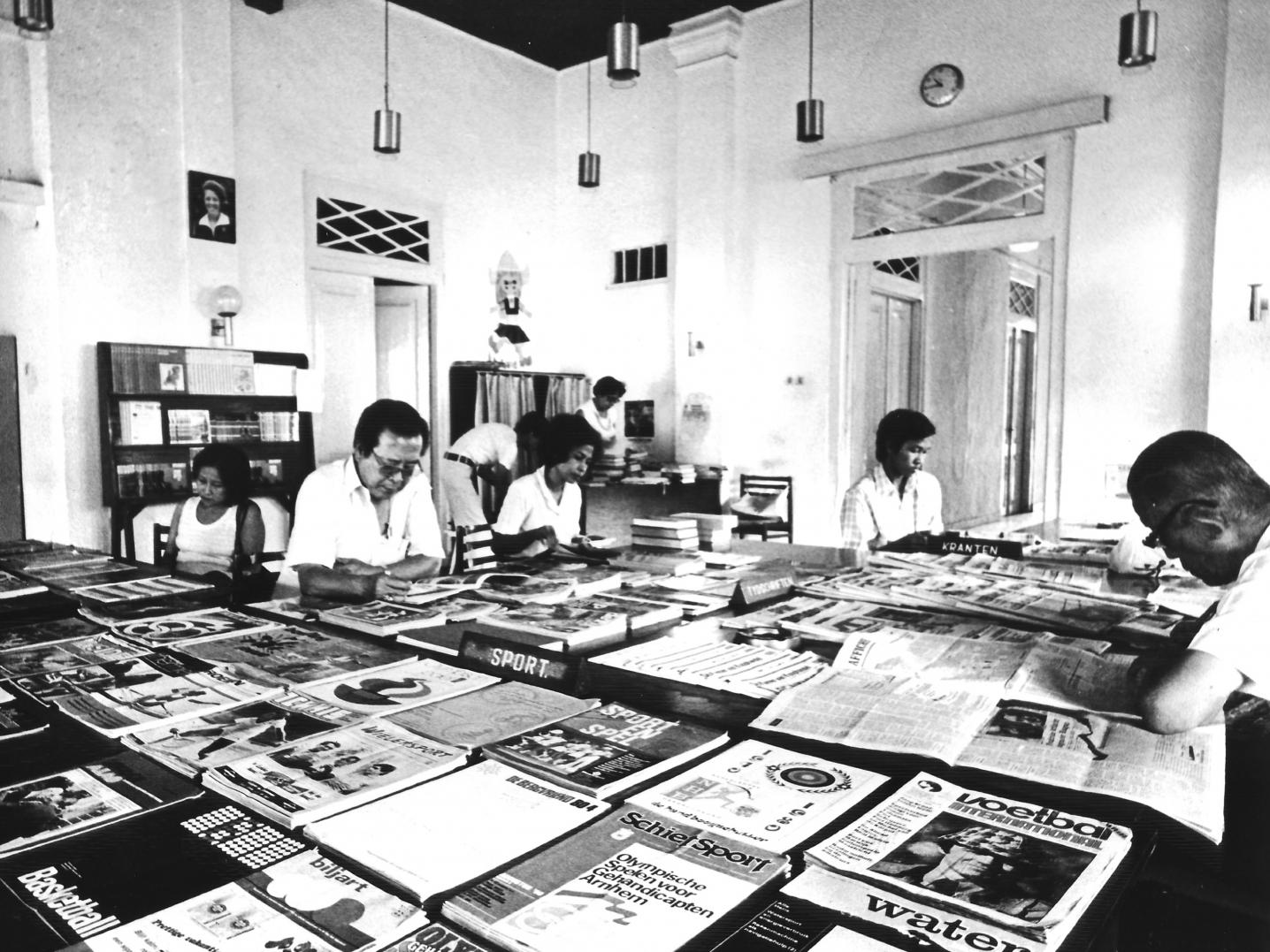 In the years after its establishment, the Erasmus Huis grew with every exhibition, every performance, every lecture, in its role of forging the relationship between the Netherlands and Indonesia. During their state visit to Indonesia in 1971 Queen Juliana and Prince Bernhard visited the cultural centre briefly, to accentuate its role; not in the least in providing Dutch language courses. This actually was the first time ever a Dutch monarch, and only the second time a member of the Dutch royal family, visited the Archipelago: the only other time was a visit by Prince Henry ‘the Navigator’, the third son of King William II, in 1837.

In 1973, the Dutch newspaper Algemeen Dagblad writes: “There is a clear growth in the bilateral relations between the Netherlands and Indonesia (…) Most impressive is the growing Indonesian-Dutch cooperation noticeable in the cultural field. The Dutch Erasmus Huis has grown into a cultural centre of allure”. Interestingly, this newspaper states that “after English, Dutch ranks second among foreign languages at Indonesian universities”, whereas in the same year, Dutch newspaper NRC Handelsblad warns that “The position of Dutch threatened: In twenty year Indonesia will only speak Indonesian”. In the same article, NRC Handelsblad notes the number of visitors to the Erasmus Huis: 95,464 in the previous two years (158 a day on average), with 15,777 that came to attend any of the events the cultural centre hosted, such as performances by comedian Paul van Vliet, the Mendelssohn Trio and The Diary of a Fool by Henk van Ulsen. Indeed, concludes the newspaper, “a range of activities for the Netherlands, which is so much in the spotlight”.

To a new home

In 1981 the Netherlands Embassy and the Erasmus Huis both move into a new compound in the then-new Jakarta suburb of Kuningan. Dutch newspaper De Volkskrant observes that “thirty-two years after the transfer of sovereignty, the Dutch Embassy in Jakarta moves from an old colonial building to a new accommodation, which should symbolise a modern relationship, in a street named after an Indonesian nationalist (…) in Dutch modern architectural style, adapted to Indonesian conditions”. A nice anecdote involves the performance of (again) comedian Paul van Vliet who was in Jakarta at the time of the opening: “There were difficulties with a venue. After urgent consultation, the brand-new Erasmus Huis, still smelling of wet paint, was able to accommodate the performance. Without knowing it, Paul van Vliet was the first Dutch artist to perform and to open the new cultural centre”. The new centre was opened by then state secretary of Foreign Affairs D.F van der Mei and then mayor of Rotterdam André van der Louw (Rotterdam being the city of birth of the philosopher Erasmus, the centre’s namesake).

The role of the Erasmus Huis is clearly explained by Dutch artist Walter Nobbe in Amsterdam newspaper Het Parool in 1983, describing it as “something like the Goethe Institutes of Germany abroad. All kinds of cultural activities are organised there. They invite poets, musicians and authors to make contact with Indonesian artists and the public”. In 1988, The New York Times is surprised to notice that in Indonesia, a kind of colonial nostalgia seems to be developing: “Dutch language courses at Erasmus House are full; Dutch colonial buildings are being restored, including the old City Theater, built when Jakarta was Batavia. Restaurants, and one exclusive club frankly evoking the colonial era, are opening”. At the same time, the role of the Dutch language is fading away, as NRC already predicted two decades before. In 1994 researcher Kees Groeneboer concluded that “As a dead language it still lives on and Dutch has actually taken on the role of what used to be Latin in Europe. It is a source language, it is the language that gives access to knowledge stored in Dutch about the Indonesian past”. 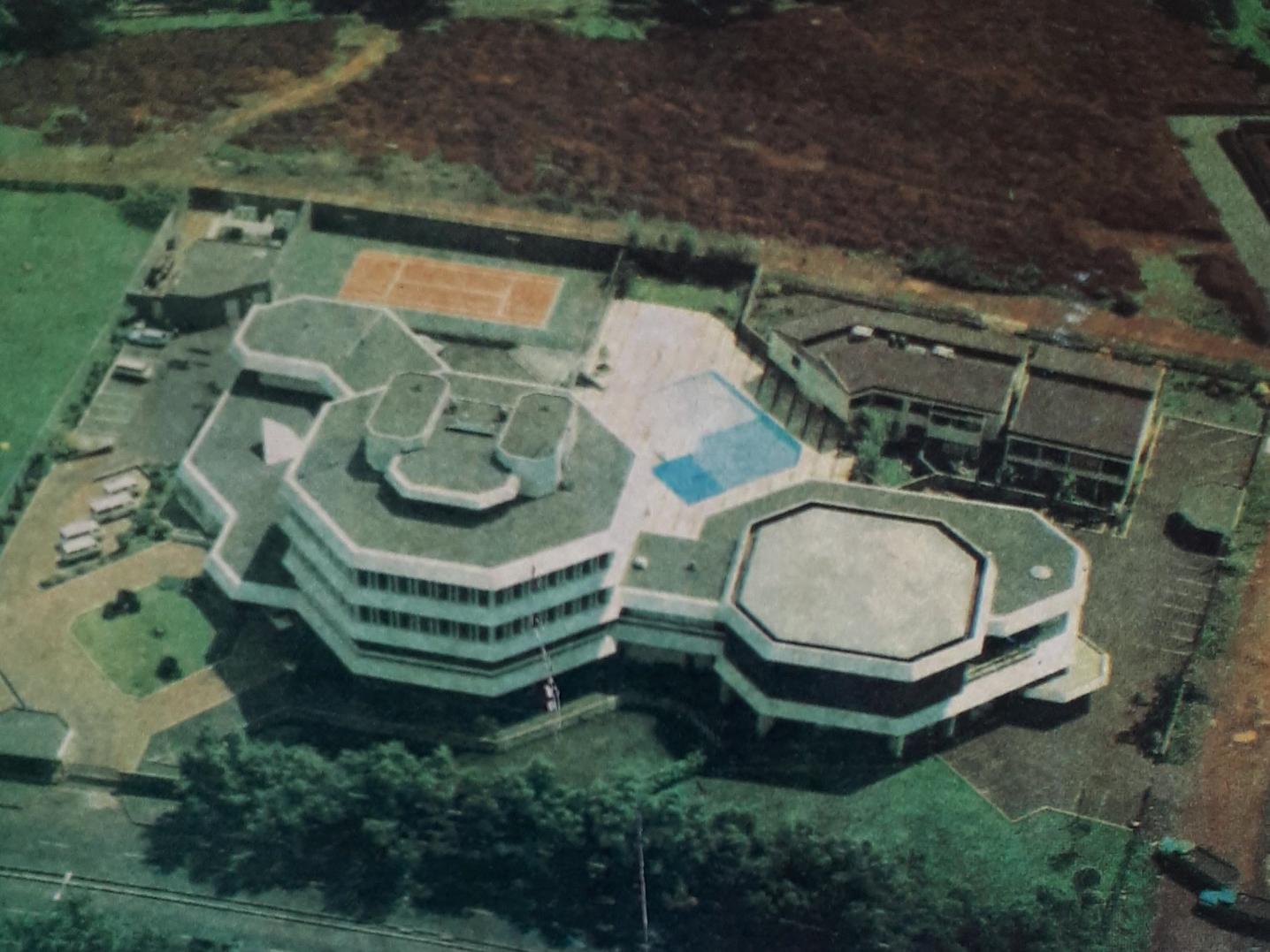 Focus on the future

Gradually the focus of the cultural cooperation between the Netherlands and Indonesia was shifting away from the past towards the future. During the state visit of Queen Beatrix, Prince Claus and Crown prince Willem-Alexander in 1995, the Erasmus Huis was part of the programme for a visit to an exhibition on graphic design. Increasingly, the Erasmus Huis provided a stage not only to Dutch artists but also to Indonesian artists. Its agenda was broadening to include topics with which the Netherlands was positioning itself internationally, such as women’s rights, the environment and freedom of speech. In 2018 the Erasmus Huis was fully renovated, with upgraded facilities and new interiors featuring Dutch Design. In March 2020, during the recent state visit of (now) King Willem-Alexander and Queen Máxima to Indonesia and on the same day the King offered his apologies for the Dutch atrocities during the Indonesian war of independence, the royal couple visited Erasmus Huis to view photo exhibition ‘Innovation’, which was part of a competition for young Indonesian photographers.

The COVID-19 pandemic forced the Erasmus Huis to close its doors in 2020. The cultural centre currently operates online with a full programme called ‘e-rasmus huis’. For the occasion of its 50-years anniversary in 2020, which unfortunately coincided with the COVID-19 pandemic restrictions, the centre launched a Spotify playlist of different artists that have performed on its premises in the past years, as well as a campaign of testimonials of ‘Erasmus Huis alumni’.

In changing times, the Erasmus Huis has been providing a safe harbour for Dutch as well as Indonesian artists. Its mission of cooperation and exchanges through culture will remain relevant for many years to come. 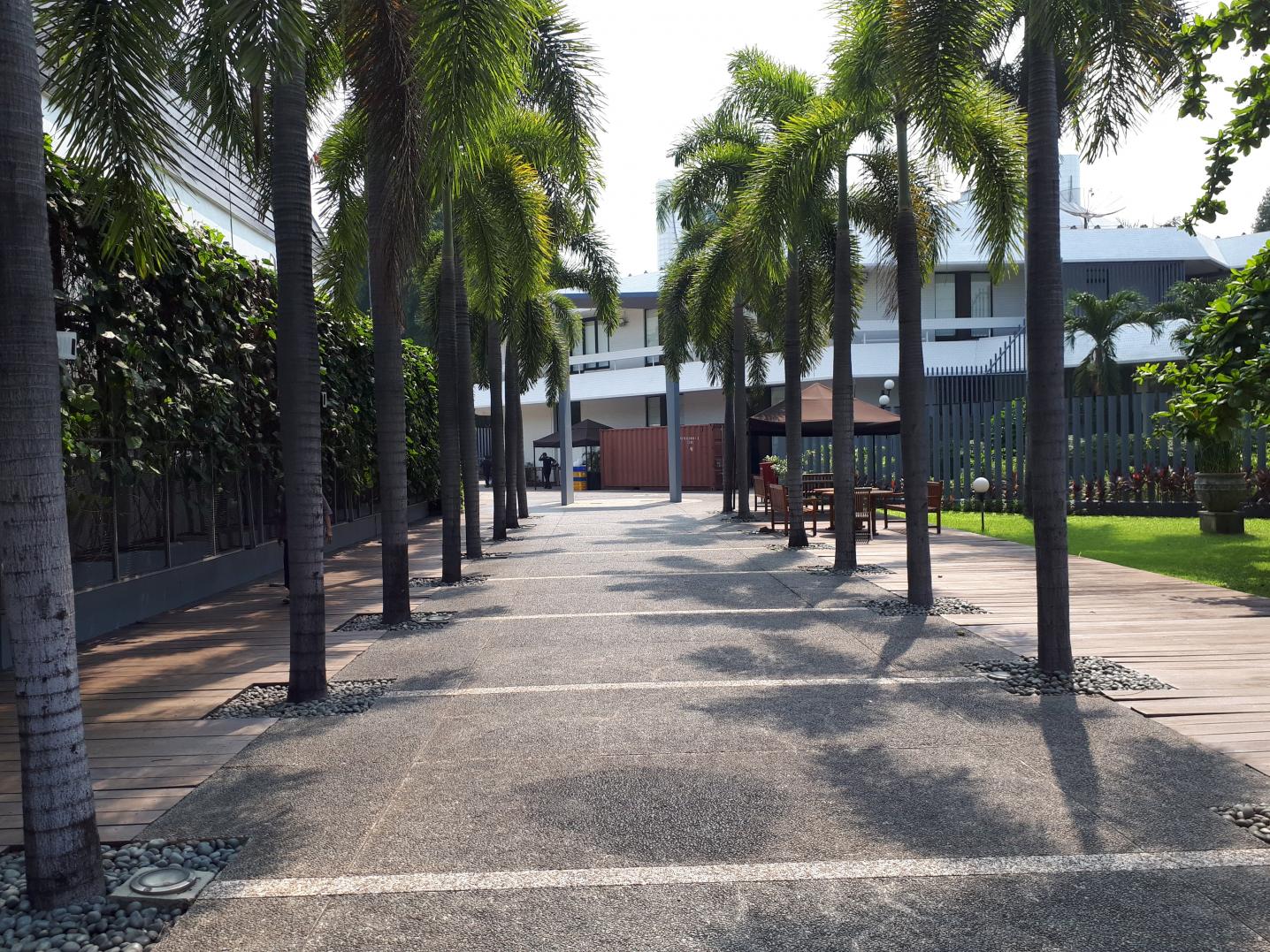 Check out the complete overview of Dutch cultural activities in Indonesia. 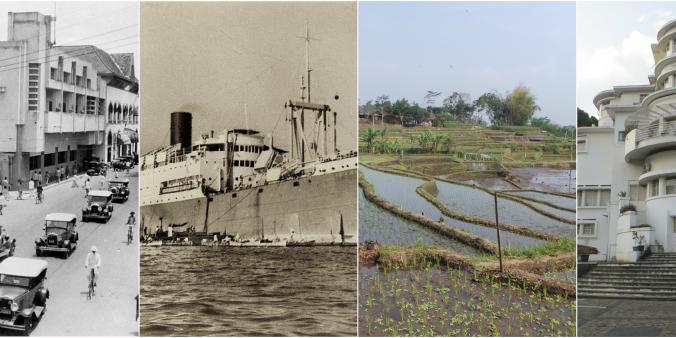 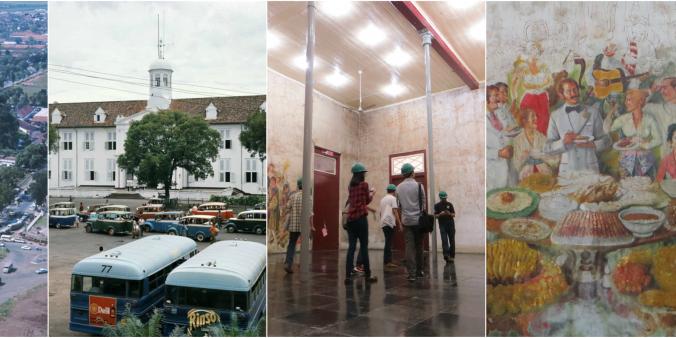 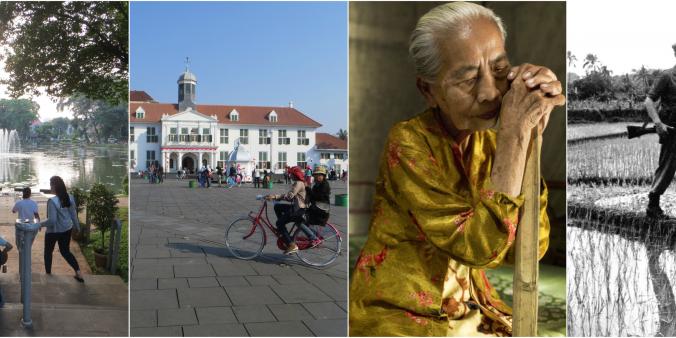 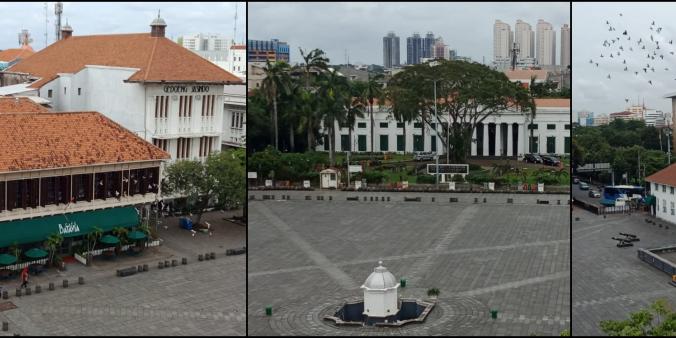