A gathering on September 18 to discuss how international cooperation can be organised in a way that is fair in respect to the usage of language.

Fair International Cultural Cooperation is a series of gatherings with which DutchCulture and international partners explore the possibility of an internationally sourced and accepted code of conduct. Each gathering covers a specific theme: funding in 2018, climate change in 2019, and language this year, on September 18 in Amsterdam, during the Forum on European Culture. See below for more information about the background and goals of this series.

When working abroad and collaborating internationally, cultural practitioners enter a space which is already characterized by cultural differences and structural power inequalities. One of these inequalities arise from the use of language. This can happen in three ways:
1.   The chosen language of communication usually benefits one party over the other.
2.   The used vocabulary is determining how the message is valued.
3.   The meaning of the words used vary depend on one’s cultural background.

See the further exploration of the theme language below.

Goals of the gathering

What are the opportunities and challenges in your organisations, your funding systems, with partners or with audiences in arranging more fair international cultural cooperations with respect to the use of language? I.e. which practical tools or methods could we develop in order to realise the shared ethical principles concerning linguistic fairness? What are the best and ‘failed’ cases we can refer to?

The discussion will be supported by our keynote speaker Rasmus Nilausen and additional readings concerning Fair International Cultural Cooperation - Language. Similar to last year, the outcomes of these discussions will be presented as a report and will be used to further the conversation on Fair practices within international cultural cooperation.

Rasmus Nilausen is a Danish born Barcelona based painter. Recently he formed part of the residency programme at the Van Eyck Academie in Maastricht, The Netherlands. His interest in painting is based on personal mythologies and languages that he reconfigures into new meanings and narratives, sometimes applying typographical elements and texts on the canvases. He deals with painting as yet another language to be translated, deciphered and most likely misunderstood. Rasmus studied at Chelsea College of Art and Design in London and at the Faculty of Fine Art in Barcelona where he now teaches painting. His work has been shown internationally at galleries and art fairs in addition to institutions like the ICA–Institute of Contemporary Art in London and at Tranen and OVERGADEN in Copenhagen, as well as at La Capella, Antoni Tàpies Foundation, and the Suñol Foundation in Barcelona. 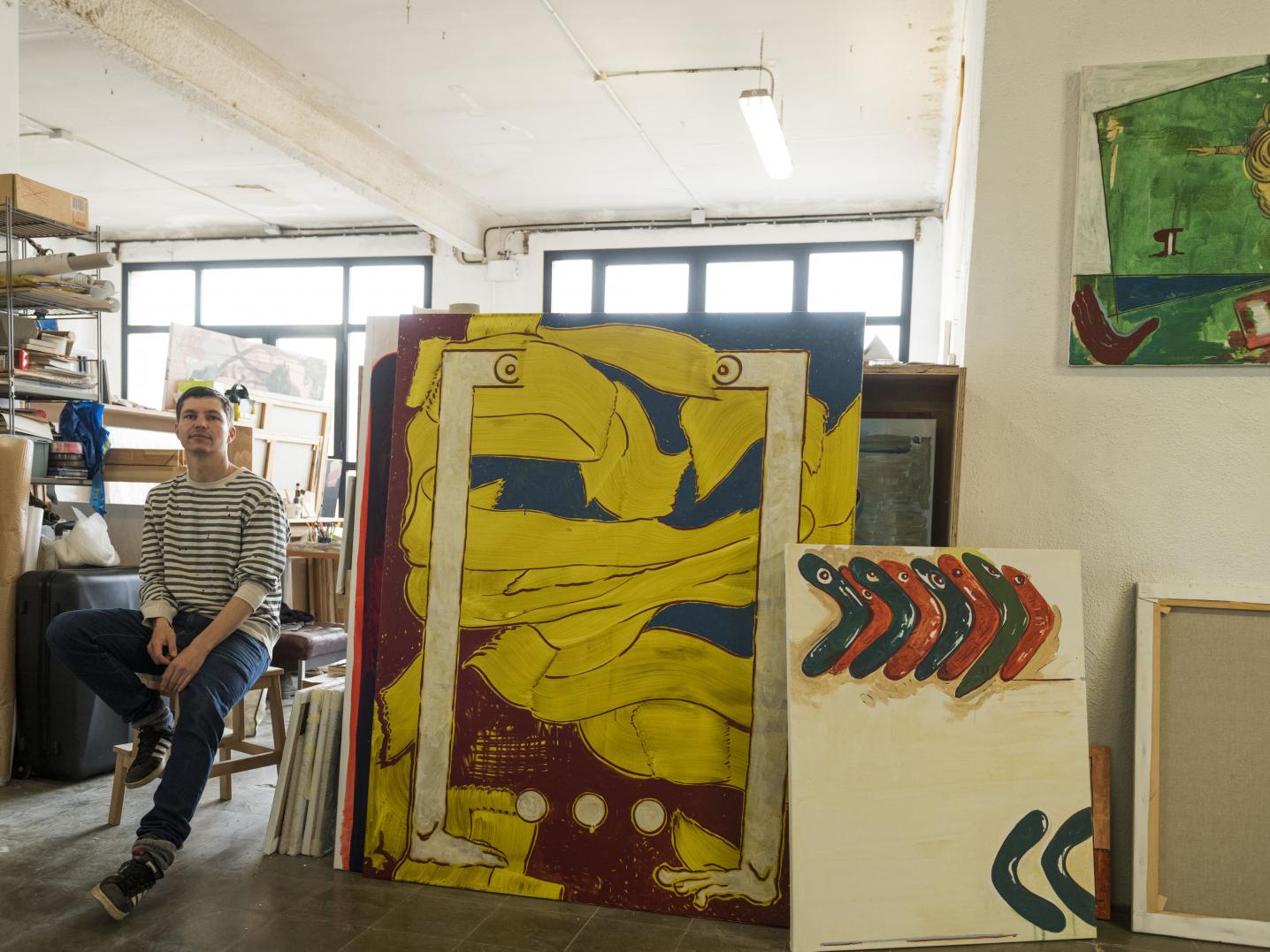 The Open Call for applications is now closed. The applications are being reviewed by the external committee. The selection of the participants will be announced the first week of August. In case of any questions, please contact Julia Groen.

- Tessa Leuwsha, writer and Policy officer Culture the Embassy of the Kingdom of the Netherlands, Surinam.

Exploration of the theme 2020: Language

Despite the fact that international relations are under pressure, and with Great Britain no longer a formal part of the European Union, English is still the most commonly used language in the day-to-day dealings of many internationally operating sectors, including the arts. Its force is unmistakable and ubiquitous. It is the lingua franca that, on the one hand, allows for many previously unconnected peoples of Europe and the world to speak to each other - on an unprecedented scale. The power of having a mutual language is visible when we consider the level of cultural exchange between, for example, Spain and South American countries. Yet the prominence of a certain languages excludes certain voices or concepts from the conversation, exposing larger global power structures by slowly muting other languages and voices around the world.

Open and frequent communication are widely considered to be the foremost essential conditions of fair cultural collaborations and defines us as a people. However, in dissimilar international contexts, the way in which language is used can close rather than open channels of communication. Within international artistic collaborations, important decisions about the chosen natural language, the appropriate wording, the specific use, media and meaning of language, are often made unconsciously and out of self-evidence. This has important consequences for both the partners, other stakeholders and the work itself. As a result of this lack of conscious decision-making many international collaborations unintentionally fortify global power differences - reinforcing the hegemonic Anglo-Saxon world expressed through the dominance of English as the lingua franca. For example, the colonial history of many Global South countries remains evident in the expected vocabulary of funding applications. Rather than critiquing dominant ideologies and challenging injustices, many international cultural projects unknowingly reproduce existing power structures, impeding the possibility of fair collaboration.

Broadly speaking, one could distinguish three aspects of language that are prone to be unfairly arranged within cultural collaborations - all three aspects entail crucial decisions that should not be made unknowingly as a matter of course, but rather consciously with respect to the ideal of fair international cultural cooperation.

First of all, we have the chosen language of communication [voertaal], which is in international collaborations often either a lingua franca or a common language inherited from a colonial past. Since language is profoundly constitutive for one’s existential, cultural and artistic identity, the decision for a lingua franca like English or French is often too quickly and automatically made, as such a decision can can curb freedom of artistic expressions and linguistic diversity, reinforcing residual resentments from colonial past. While neglecting minor linguistic cultures and less familiar dialects (such as African, American, Vernacular, English) may be commonplace, fair intercultural collaborations requires that one must overcome inherent biases around the use of language. Such an ideological negligence of minor linguistic cultures, also with respect to unrecognized dialects (such as African American Vernacular English), is one of the most decisive, but also quite unruly challenges to overcome in the strife for fair intercultural collaborations.

Secondly, within a chosen language of communication, the used vocabulary plays a crucial role, both with regard to expectations of certain wording in fund applications and with regard to the artistic ownership of each maker in the shared artistic discourse of the work that is being made. Such vocabulary can be ‘unfair’ when it tacitly works through funding priorities of European countries that requires less-resourced countries to comply and compete from a disadvantaged position.

Lastly, we should take into consideration two closely related aspects of language, namely on the one hand the way in which the chosen vocabulary in a chosen language of communication is used, and, on the other hand, the meaning of these words. In intercultural dialogues of international artistic collaborations, feelings of misunderstanding and disappointment often arise when words are used differently or conjure divergent associations or intentions giving rise to distinctive understandings of the same words. Within an intercultural dialogue, one should always anticipate the possibility of such semantic discrepancies and check whether one’s linguistic habits and assumptions are shared by the partner or idiosyncratic to one’s own culture.

In the context of international cultural collaborations, decisions about language are often made without sensitivity generating exclusive arenas which take artistic freedom and equity for granted while emphasizing the influence of the more powerful stakeholders.

As a result, rather than deconstructing existing power dynamics in the contemporary art world, unequal power relations are reproduced / replicated. This meeting aims to break this tendency by making our decisions about language explicit, and reflect on both the ethical principles and the practical measures on the basis of which we can rearrange international cultural collaborations so that they are fair with respect to language.

Similar to last year, the outcomes of these discussions will be presented as a report and will be used to further the conversation on Fair within international cultural cooperation.

Note: We are aware that in this text we ourselves use a certain language, a certain tone and a certain vocabulary. We would encourage participants to do the same and to use their own language, tone and vocabulary. An open attitude towards the richness of linguistic diversity is the starting point of this conference.

With this series, DutchCulture advocates and examines international cultural cooperation. In June 2018 IETM, On the Move and DutchCulture published the toolkit “Beyond Curiosity and Desire: Towards Fairer International Collaborations in the Arts”, authored by Mike van Graan. The publication explores why and how artists, cultural professionals and cultural institutions can adopt a more equitable approach to international and intercultural collaborations.

In the wake of the publication, DutchCulture set out to explore both the possibilities and the challenges of fair international cultural cooperation through a series of gatherings. These gatherings provide a platform to strengthen each other’s knowledge and identify ways that participants can translate it into actions, cultural policies and long term international collaborations. The goal is to formulate a mutually constructed code of conduct which can be adopted by cultural practitioners around the world.

The first gathering, focusing on international funding parties, was organised in late 2018. The second, organised in 2019, was about climate change. Both discussions were joined by more than 40 institutions from all over the world. Thanks to them, we identified a number of challenges and practical solutions for fair cooperation, as formulated in two respective reports: the report on Fair Cultural Cooperation - Funding and the report on Fair Cultural Cooperation - Climate Change.

About Forum on European Culture

Forum on European Culture is a biennial forum on the strength, impact and value of art and culture for Europe. The third edition is about ‘We The People’ and takes place from 17 – 20 September 2020 in Amsterdam. The Forum is an initiative of DutchCulture and De Balie. Read more via the website.